History of Donkeys in SA

A brief history of donkeys in South Africa

The first people to use pack animals in South Africa were the Khoekhoen. They used cattle to carry their goods, to ride on and for fighting wars. In the 1600s when the European settlers arrived they used oxen to pull their wagons and ploughs.

Donkeys originate from wild asses found in Africa and Asia. Africa had two different types, the Nubian wild ass from the north and the Somali wild ass from the east. Donkeys were domesticated about 5 000 years ago. They were used as pack animals in the Sahara Desert before camels that came to Africa for the first time (from Arabia) in the third century. Despite their African origins, the donkeys that arrived in South Africa for the first time in 1656 came from Europe. They were used both as pack and draft animals on farms. 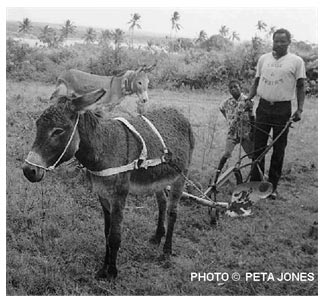 Donkeys have been used on farms since they first came to South Africa more than 300 years ago and they are still used in rural areas in exactly the same way.

Before seeds can be sown the ground needs to be prepared by ploughing. Donkeys can pull a small plough guided by someone holding onto the handles. The plough digs into the earth, turns it and leaves a little furrow.

At the beginning of the twentieth century farmers in the Namaqualand area in the Northern Cape and in the North-West provinces used donkeys to thresh wheat. The wheat ears were placed on a floor specially made for threshing. Donkeys were used to step on the ears of wheat and in this way the ears were separated from the stalks. 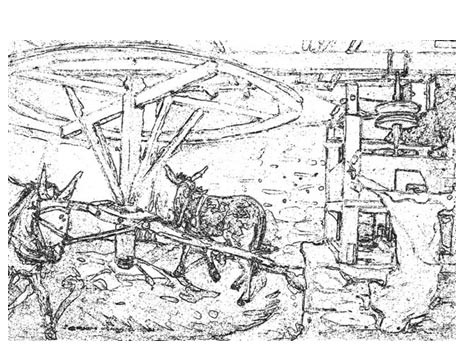 Around the same time almost every farm in Namaqualand had a horse-mill. Although it is called a horse-mill it was also worked by donkeys. The mill is a wooden machine with a large upright beam to which the donkeys are attached. They walk in a circle and the beam turns a large wheel above which turns a smaller wheel. This wheel drives the stone, which grinds the grain into flour. 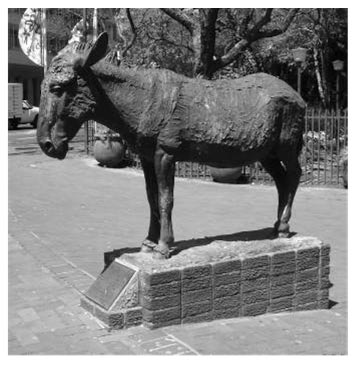 Donkeys on the mines

Donkeys were not only used on farms. In Polokwane there is a statue of a donkey that honours the role that donkeys played in mining gold.

This is what is written on the plaque.

Donkeys were also used in asbestos and diamond mining in the Northern Cape. In Kimberley the donkeys pulled little wagons called coco-pans. The coco-pans had small wheels that ran along a track – almost like a tiny train on a railway track. The donkeys carried the special soil called kimberlite in which diamonds could be found, from the mine to outside. The kimberlite was then spread out on the ground and broken up by hand. After that machinery was used to separate the rough diamonds from the remaining soil.

For over 100 years donkeys have been used in the Karoo for building dams. A team of six to eight donkeys work together to pull a type of scraper that scrapes the ground and picks the earth up at the same time. A person needs to guide the scraper as the donkeys pull. The donkeys can work on dams that are difficult for modern machines to reach, and their hooves can compact the earth far better. 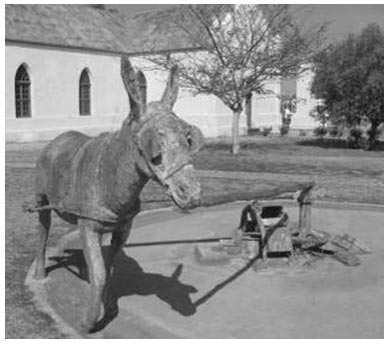 There is a statue in Upington that honours the donkey and the role that it played in the development of the town’s water system.

Upington is situated in the Northern Cape that is a very dry area. It makes sense that Upington was first developed on the banks of the Orange River. In the early 1880s pieces of land were given to people to start farms. Abraham September, who was a freed slave, also received land. With the help of donkeys Abraham dug canals to lead the water from the river to the land. Some of those canals are still being used today.

The statue of the donkey in Upington shows a donkey working a water lift or pump which was known as a bakkiespomp. The water lift consisted of two wheels that were joined by a chain. Attached to the chain were steel buckets that filled with water when they were dipped into the well deep below the ground. The donkey was attached to the water lift by a beam. By walking in a circle he made the pump work.

A sad time for donkeys

Donkeys were used as beasts of burden on farms in South Africa for about 300 years. With the use of fuel and the tractor large-scale farms no longer relied on donkeys and they were no longer as valued as they had been.

In the second half of the twentieth century the use of donkeys was actively discouraged. Some of the reasons for this include the lack of knowledge about the usefulness of donkeys, wrong beliefs about donkeys, for instance, that they are destructive as well as the promotion of fuel-driven vehicles like tractors and bakkies in preference of animals. In Thaba ’Nchu in the Free State donkeys were banned and in the then-Transkei they were taxed more than cattle.

But probably the saddest period in the history of donkeys in South Africa was the massacre of thousands of donkeys in Bophuthatswana (a former homeland, now part of the North-West province) in the early 1980s. It was believed by some people in power at the time that there were too many donkeys. Many people whose donkeys were shot during this time lost their means of survival. 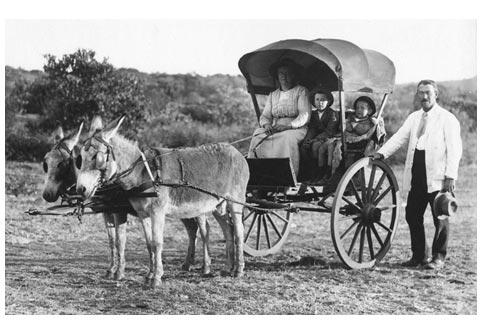 Donkeys were used to pull carts and wagons for hundreds of years before cars were invented, and they still do today. The big difference between the carts and wagons of the past and those used today lies in the wheels. Today the wheels have tyres that are filled with air, but in the past the wheels were made of iron.

If you didn’t own a cart a good way to transport goods was using a sledge. A sledge is a vehicle without wheels that slides over the ground. A y-shaped branch or trunk of a tree makes a good sledge. Some farmers used to move to a different place when the seasons changed. Donkeys then pulled a sledge carrying their belongings. The sledge was not allowed to be pulled on the wagon road as it damaged the road therefore they had to travel through the veld.

The people known as the Karoo Karretjiemense own donkeys that pull carts. These carts carry all their possessions, because like their ancestors, the Khoekhoen and the San, the Karretjiemense are always on the move. They move between the sheep farms of the Great Karoo where they have worked for more than a hundred years as sheep shearers and continue to do. Their travels take them through the provinces of the Western, Eastern and Northern Cape.

The Karretjiemense can be compared to travellers who move from campsite to campsite with their caravans, setting up camp each time. There is one huge difference – the Karretjiemense are very poor. Their car is their donkeys and their caravan is their cart. Their carts have been made from old or broken-down horse carriages and motor cars. When they set up camp they make their shelter slightly more comfortable by adding pieces of corrugated iron, wood, hessian and plastic to the cart.

In the past farmers used to allow the Karretjiemense to set up camp on their farms during shearing time. Recently, however, few farmers allow them to camp on their farm. The Karretjiemense camp on empty land next to roads or on any land they can find that does not belong to farmers. The donkeys graze freely in the area close to the camp. Donkeys, unlike horses, can eat a varied diet consisting of grass, shrubs and leaves. Therefore they survive very well in the semi-arid Karoo where there is little grazing.

Every donkey that belongs to a family has a name. It is the job of the youngest son in the family to name a foal that has been born. The Karretjiemense would not be able to live as they do without their donkeys that are very valuable to them. Donkeys are hardworking, intelligent and easy to manage when they are well cared for and appreciated.

Every donation helps us to improve the facilities, expand our support and rehabilitation of donkeys elsewhere and work towards a more caring culture in our society.

Email: This email address is being protected from spambots. You need JavaScript enabled to view it.

Amazing little place where Donkeys are loved and well taken care of. Wonderful information and interaction with the donkeys directly. Great place to enjoy some light meals and snacks as well.

The sanctuary totally changed my perspective on donkeys, what an amazing experience! Well worth a visit, especially with kids.